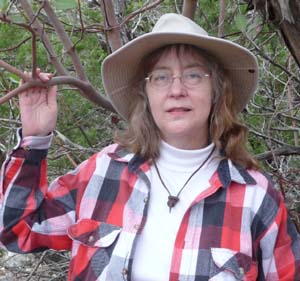 Dyanne Cortez is a Texas native who enjoys writing about the nature, culture and characters of her home state. Her articles have appeared in Texas Coop Power, Texas Hill Country View, The Austin Chronicle, American Profile, The Good Life, and Enchanted Rock. She began reporting on the Kerrville Folk Festival in 1981 as Arts and Entertainment Editor for the New Braunfels Herald-Zeitung. She's a veteran of the festival's volunteer staff, having served on the Office, VIP, and T-shirt crews. As a musician, she holds the distinction of being the festival's first jammin' bassoonist. She has appeared on the Kerrville stage with David Amram and with the Glen Alyn earnest tub Band. At home in Driftwood, she indulges her classical background with the The Starlight Symphony.

Look for Dyanne's work in:

Javier Cortez has been a tipi camper, buckskinner, and creator of wearable art since the early 1970s. He has demonstrated craft and camping skills at art shows and heritage festivals across Texas. His bead and leather work has appeared on album covers, folk and country music videos, and the 2004 Touchstone Pictures film, The Alamo.