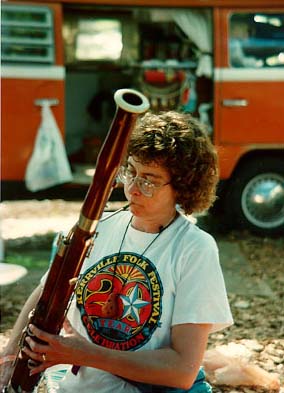 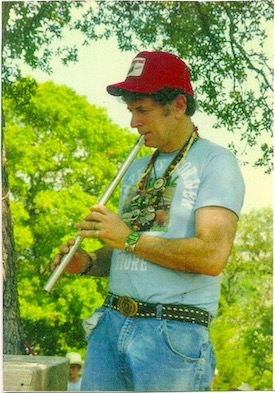 Upstaged. Eclipsed. Outclassed. That's how I felt at campfires in my first few years at Kerrville.

I wasn't used to that. Back in high school, I had been an award-winning bassoonist. I'd worn medals on my band uniform and outplayed kids from bigger schools at district and regional tryouts. I hadn't given up music after graduation, the way some people do. I'd sung second alto in a college choir, joined community bands and orchestras, played in the "pit" for a couple of musical theater productions, and gotten together with professors in Georgetown for an occasional recorder-and-harpsichord soiree.

All those activities depended heavily on printed scores. I learned to read music at the age of five or six, about the same time I learned to read English. I wasn't hopelessly lost without it: if I knew how a tune went, I could pick it out on the piano. I could add a basic three-chord progression in C, F or G. And those years of singing on the band bus had taught me to harmonize by ear, a little.

At Kerrville, however, my singing was mediocre at best. The night sparkled with unique, outstanding voices doing songs they'd written themselves, songs I didn't know the words to. Other folks sat around with guitars and fiddles, improvising accompaniments on the spot. I didn't write songs or play guitar. So I brought my recorders, my baroque-style wooden flutes. I hung at the edges of campfire circles, listening with great concentration, groping in the dark for notes that might fit. Sometimes I lucked out and played a nice riff. Sometimes I sounded like shit.

In '84, my friend Bennedene introduced me to Ned Mefford. Benne was a neighbor in New Braunfels, a follower of my musical career, who thought I was talented and wonderful.

"You gotta meet this guy," she gushed, having just met him herself. "He has a rock band in Houston. He plays flute beautifully. And get this, Dyanne--Ned used to play bassoon!"

"I tried," said Ned. "Never was any good at it, so I gave it up. Did you bring yours?" Of course I hadn't. A bassoon, to a folk festival?

I thought he must be crazy. Sure, I'd seen all kinds of instruments at Kerrville. But a bassoon? Too weird, and much too temperamental for this outdoor environment. Bassoons don't take kindly to humidity or sudden temperature changes. They require fragile double reeds that have to be soaked before playing, dried out afterward, and stored in a safe place. Ned was nuts, all right. But he seemed so nice, so genuinely disappointed, that I brought the darned thing in '85 just to make him happy.

That was the year of my first real group camp, with Bill and Joyce Snodgrass and all their oddball musician friends from Austin. Ned was a frequent visitor. So was Jeff, a reporter from the Dallas Times-Herald. I'd met him at the '83 Folk Festival, and had developed a mild crush. Seeing him again two years later, I was starting to think it might be mutual.

Some of us got to playing around the campfire one night. I don't remember whose idea it was to try that old country and western classic, "Faded Love." I picked out the tune on my bassoon, my low, reedy notes rising with the smoke from our fire. Jerry Grigadean and Jacob Hill played chords to back me up, and then I experimented with counterpoint while Joyce led the chorus on her fiddle.

It sounded better than you might think. We laughed, wondering what Bob Wills would have thought, and tried it again.

"I dare you to do that at the Ballad Tree tomorrow," said Joyce.

At twenty minutes 'til three the following afternoon, we lugged our instruments up Chapel Hill and signed the list of aspiring performers for the Ballad Tree.

Our camp was well represented. Joyce, Jacob and Jerry were there to play behind me. Jerry was also backing up K.D. Novak, who planned to try one of her new songs. Various friends and relatives were waiting in the audience. We grabbed a bench on the north end of the brush arbor, where the tree provided some extra shade, and settled down to wait our turn.

Melissa Javors was hosting that day. The moment finally came when she read "Dyanne Fry?" from her list. When I stood up, she added, "...on bassoon. How lovely!"

I don't know what impressed me more, her positive reaction or the fact that she actually knew what a bassoon was. I hoisted myself onto the altar and slung my seat strap over the edge. My band arranged itself on my right flank. I had a little introductory speech that I'd been rehearsing in my head for the last hour or so, hoping I wouldn't stutter. I looked at the crowd, took a deep breath, and spit it out.

"We worked this up at a campfire last night, and felt like we ought to share it with you. It's not an original piece; in fact, I'm sure you've all heard it before. But I'm betting you never heard it like this." Then I stuck the bassoon in my mouth and blew.

They recognized "Faded Love" in the first two bars. There was a ripple of laughter, a scattering of applause. We did two verses and two choruses, trading off leads, and finished to a rousing ovation.

"Does David know you have a bassoon on the ranch?" Melissa Javors asked me later, when everyone on the list had played and the crowd was packing up to meander back down the hill.

There are a lot of Davids in the Kerrville community, but I knew right away which one she meant. She meant David Amram, former goodwill ambassador for the U.S. government, composer-in-residence at the New York Philharmonic. The eccentric conductor who looks equally at home in white tie and tails or in love beads and overalls with pennywhistles protruding from every pocket. Of all the Kerrville performers, Amram has always been one of those I most admired."I'm going to tell him," said Melissa. "He may want to use you in his set tonight."

More About This Book